Ben & Jerry’s have sponsored Student Switch Off on an in-kind basis since 2006 and have been an amazing partner for our campaign – particularly in helping us to reach beyond those already interested in ethical and environmental issues. As a dairy company they have an important role to place in reducing carbon emissions which they recognise and are trying to address.

You can read about their Caring Dairy initiative and their work on Climate Justice.

Back in 2007, Ben & Jerry’s conducted a carbon audit of their entire supply chain from the production of their milk to the refrigeration and transportation of the ice cream. They then set in place actions to reduce their carbon emissions by 10% by installing various energy efficiency measures and offset their remaining emissions by investing in wind farms, bio-gas and solar projects – in so doing they became the world’s first climate neutral ice cream.

We know that not everyone likes the idea of offsetting so it’s worth mentioning that since going carbon neutral Ben & Jerry’s have continued to drive down their direct emissions – for example, by installing an anaerobic digestor at their ice cream factory in the Netherlands which uses waste product to provide 50% of the energy required to run the factory. They’ve also invested in making their freezers more energy efficient.

In September 2017 Ben & Jerry’s brought vegan flavours to the UK.

It’s also worth taking a step back and comparing the embedded carbon of the ice cream we give out to students against the amount saved by the campaign. In 2016/17 the embedded carbon (including production, distribution and refrigeration) of all the Ben & Jerry’s we gave out across the UK as part of the Student Switch Off equated to around 10 tonnes of CO2. Across all UK Universities running Student Switch Off, the total saving made as a result of the campaign was over 1,500 tonnes of CO2 – and anyone who has spoken to students involved in the campaign knows that Ben & Jerry’s is an important factor in getting more students engaged and achieving that saving!

Other reasons why we work with Ben & Jerry’s is because they were set up by a couple of hippies, are Fairtrade across all their flavours, look after their staff and suppliers, and have campaigned on a whole range of ethical and environmental issues for decades – from climate justice to the quality of living for dairy cows and marriage equality. 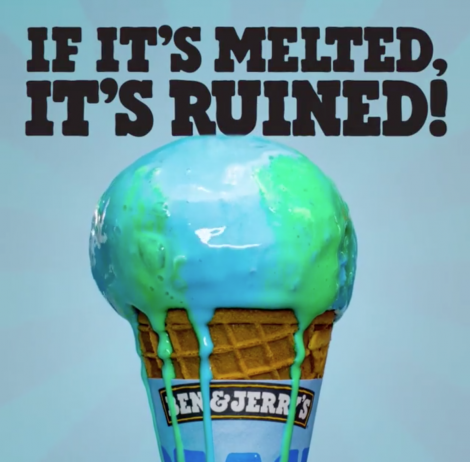